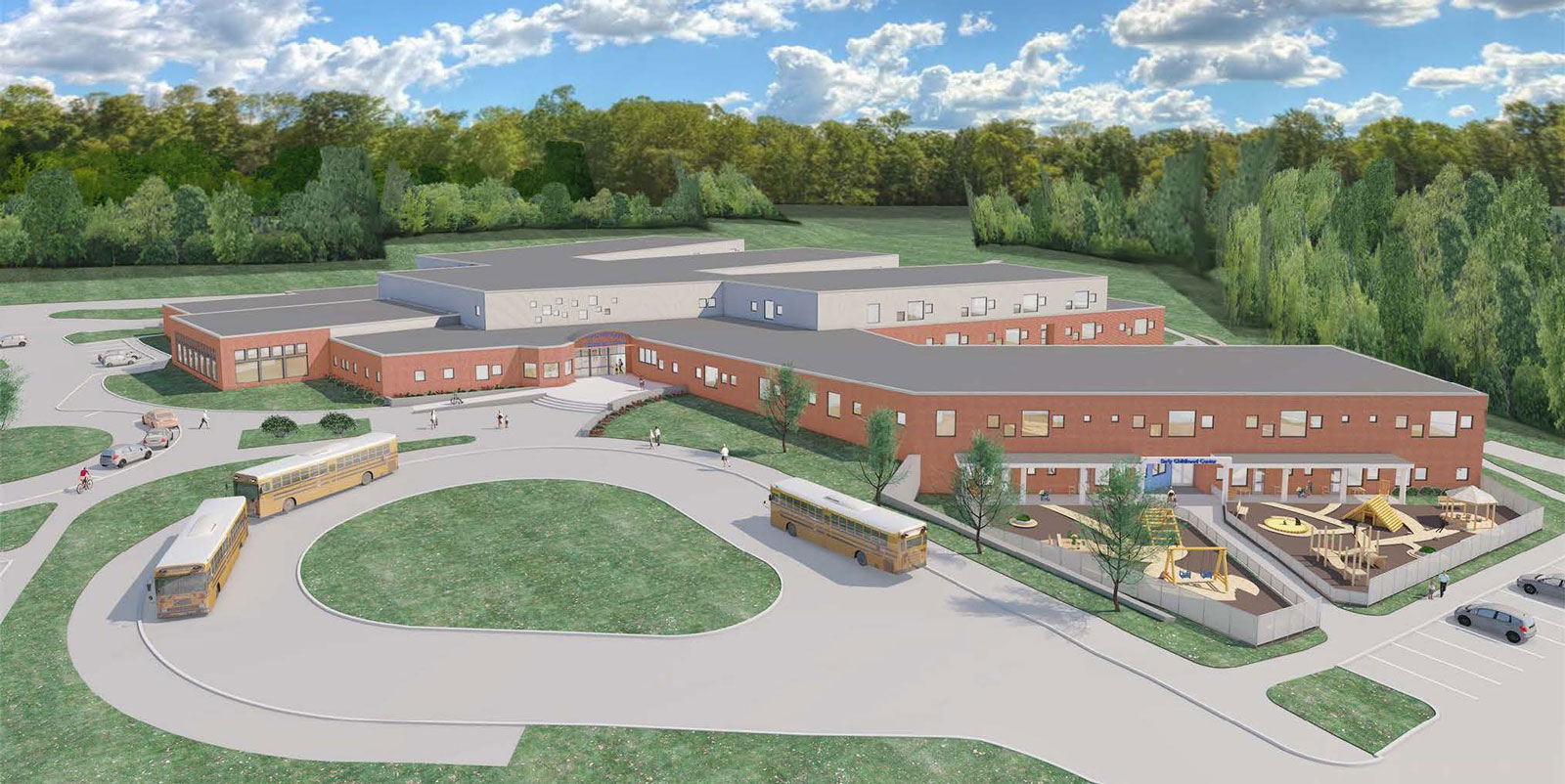 MSAD 54 and Stephen Blatt Architects (SBA) have sought feedback through a public survey since the summer of 2021. Feedback is still welcome at the following link: https://forms.gle/5Nu9wpRmFcs9VkWQ9

The MSAD 54 Board of Directors is seeking feedback from our communities including our students, staff, parents, alumni, and residents about the name of the new elementary school that is being built in Skowhegan. Please take a moment to complete the following short online survey: https://forms.gle/G9brwPrh8GxoiTaq6

Early in January, the Board will review community feedback and make a final determination on the name for the new school.  We sincerely thank you for your feedback. Should you have questions, we encourage you to reach out to us or review information on this page.

Below are draft plans for the upper elementary playground at the new elementary school. These plans will be refined over the next few weeks including at meetings with all elementary staff (11/22), the Parent Advisory group (11/29), and the Building Committee (12/7). Anyone interested in attending meetings or giving feedback should reach out.

On June 14, MSAD 54 voters overwhelmingly approved the district's plan for a $75,338,985 new elementary school.  The school, which will combine North Elementary School, Bloomfield, Margaret Chase Smith, and grades 3-5 from the Canaan Elementary school, will be primarily funded by the State of Maine.  The project, which began in 2017 with the district's application, will create a Birth through Grade 5 elementary school, the first of its kind in the state.  As part of the project the district is expanding its current age 0-3 childcare programming at Bloomfield into an early childhood center in the new school.

The state has agreed to cover ½ of the costs for our existing programming, and the district is working with our community partners including KVCAP, to raise funds for the project.  After construction this building will serve students from early childcare (6 weeks of age) through grade 5, as well as house our SCTC (Somerset Career and Technical Center) early childhood education program (students in grades 10-12).  Over the summer district architects will be working with staff to finalize design plans for review by the state early this fall.  The school is slated to open in the fall of 2025.

The State Board of Education reviewed MSAD 54's plan for a State Funded Consolidated Elementary School on the Margaret Chase Smith site. The project, which total $75,338,985 is 94% funded by the state, with 3-4% anticipated through fundraising, and 2-6% in local only costs. The district was commended by the State Board for providing a well thought out and comprehensive design that will benefit students in MSAD 54 for years to come. The next step for the project will be a community-wide referendum vote on June 14th.

District Superintendent Jonathan Moody presented before the State Construction Committee on April 29th. Committee members asked questions and scrutinized the district's Consolidated Elementary School project. The Project, which is funded primarily with state dollars, was commended for its scope and design. The project will go before the State Board of Education at their next meeting in May.

MSAD 54 administrators and Stephen Blatt Architects shared the Final Concept Design plans for the District's Consolidated Elementary School building project. At the meeting, which included nearly 70 participants, members of the community were given an extensive presentation on the project and had the opportunity to engage in a discussion around specifics of the project. The project, which is projected to cost just over $75 million, is funded primarily by state funds. The only local cost, which is 6% of the project, will be reduced with a fundraising campaign spearheaded by KVCAP and community partners. Should the roughly $3 million fundraising goal be reached, the district cost to the taxpayers will be reduced to approximately 2% of the total project cost. After questions and answers, those in attendance voted unanimously to support the project moving forward to the State Board of Education, and a June 14th referendum vote in our communities.  For a PDF of Thursday's presentation visit: https://bit.ly/3vriQG7

The concept design phase of the MSAD 54 elementary building project is winding down after a year of feedback from staff and the community, including feedback gathered at numerous public meetings and through a community-wide digital survey. The updated concept design plans can be found here: https://bit.ly/3hW1ERK

On Thursday, April 28th, at 6:00 in the High School Auditorium, the district will be holding a presentation and update on the building project. This will include a presentation by the architects and engineers, discussion of the concept design and budget, and will conclude with a straw-poll vote to support the project. Following the meeting, the State Board of Education will consider the project for funding. The project, which is nearly entirely state funded, will have a tremendous positive impact educationally for the district for years to come. We hope to see you on the 28th! 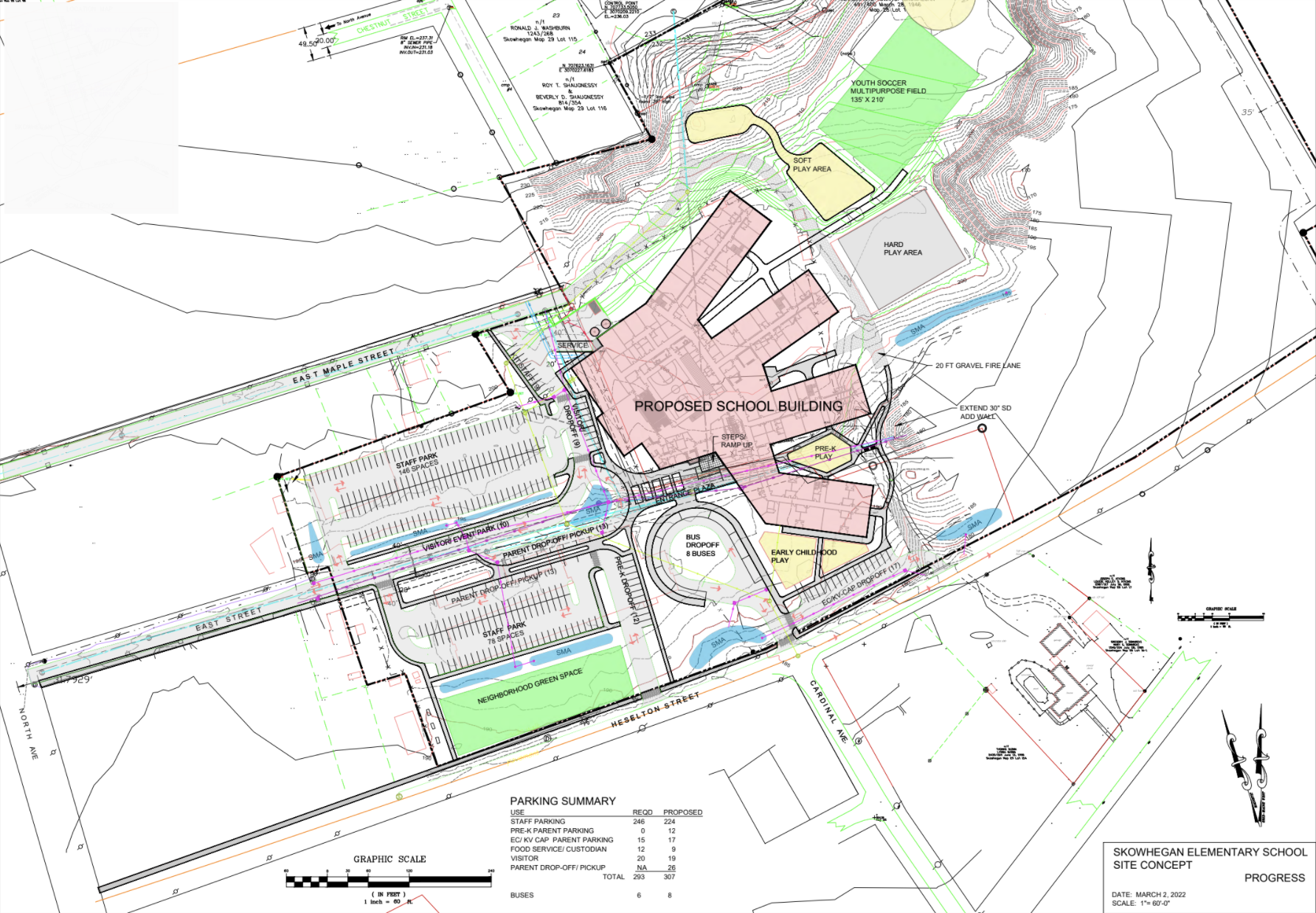 MSAD 54's most recent updated concept design plans. The District Building Committee anticipates the Concept Design phase to receive DOE support in early April and expects to have plans to the State Board of Education by May, for a June 14th referendum. The District held numerous public meetings in the fall and will conduct a public meeting in April to provide a summary of Concept Design including the updated plans and scope of the project.

The school will be built on the property where the Margaret Chase Smith School now sits, replacing North Elementary School and consolidating some grades in the district.

Classic with a splash of modern is the direction School Administrative District 54 in Skowhegan is heading as it works on the concept design for a multimillion-dollar facility that will consolidate four elementary schools and a preschool program.

The consolidated elementary school, projected to open in August 2025, may feature a library that caters to different age groups, a flexible physical education facility and design details such as lighting, ventilation, plenty of storage space and good acoustics in the cafeteria, which is where a stage would be built for presentations and performances.

The goal of this public meeting is to provide an update on the project and its progress (since state approval in 2019), and for the architects to have a dialogue with the community about what we want in our new elementary school.  The project, whose details can be found on the district website, anticipates completion of the new elementary school in the fall of 2025.  Architects Blatt and Breer have experience in the district, having designed and built both the Skowhegan Area Middle School and the Mill Stream Elementary School.

An additional public meeting/discussion will be held on October 28th via Zoom.

It is very important to us that our community voices help shape both the design and function of the new elementary school.  We encourage you to join us in the auditorium tomorrow night for the conversation with the architects.

Tomorrow evening a survey link will be added to our website for community members to share their ideas and feedback on the building project.

Should you have questions about the building project or process don't hesitate to reach out to us at school at 474-9508.

If Maine School Administrative District 54 officials stick with the projected timeline, construction is scheduled to begin in June 2023 and the school would open in the fall of 2025.

As I’m sure you know by now, MSAD 54 is well on its way toward having a new elementary school in 2025. The project, which began in 2017 with our application to the state, is progressing nicely along the state timeline for school construction. In July the State Board of education approved the Margaret Chase Smith School site as the site for our new school. Over the spring and into the start of the school year we’ve been working on educational specifications for the building and are entering the Concept Design phase of the process (see the chart).

Building Project Wins Approval by State Board of Education

MSAD 54 Superintendent Jonathan Moody met with the State Board of Education on July 14th. The committee unanimously supported approval of the Margaret Chase Smith Site for MSAD 54's building project and approved the process to move forward. For a complete view of the DOE building process visit: https://drive.google.com/file/d/1oVXPMm64qdNeQ6_jwRhzD66JM4PrFKTD/view

For agenda and minutes visit: https://www.maine.gov/doe/about/leadership/stateboard/meetings/upcoming…

The next MSAD 54 Building Committee meeting is slated for August 18th, at 6:00 in the SAMS Cafeteria.

MSAD 54 Superintendent Jonathan Moody and Support Services Manager David Leavitt were joined by engineer Andy Johnston of Atlantic Resource Consultants, and Architect Pat Carroll of Carroll Associates Landscape Architects in a meeting with the State School Construction Committee. The team presented MSAD 54's project and answered questions from the committee. The Committee unanimously supported the MSAD 54 Project Site Selection of the Margaret Chase Smith School site and commended the district for their work. The next step in the process is to meet with the State Board of Education on July 14th.

This is an in-person meeting, but will include a Zoom option to be posted to the district website prior to the meeting on May 10th.

In 2019, the state released an updated major capital school construction priority list. Of the 74 schools rated by the state, MSAD 54 had 5 schools identified:

The MSAD 54 Building Committee has followed the recommendation from Steven Blatt Architects and the state in pursuing a consolidated elementary school that will address the needs of the district for many years to come. This meeting will answer questions about the site selection process, including questions about the MCSS site. Future meetings in the fall and winter of 2021/2022 will focus on academics and programming.

October 28, 2021 - 6:00pm on Zoom
Public meeting on MSAD 54's Building Project with Architects Stephen Blatt and Doug Breer
The goal of these public meetings is to inform and engage stakeholders early in the design phase of the new state-funded elementary school project. This is an opportunity for members of the public to offer insight and ideas, and to identify community priorities. This public input and community involvement is essential to a successful, collaborative design process, and the creation of a wonderful new school facility.

Maine School Administrative District #54 does not discriminate on the basis of race, color, national origin, sex, disability, age, gender, marital status, creed, religion, honorably discharged veteran, military status, sexual orientation, gender identity or gender expression, the presence of any sensory, mental or physical disability, or the use of a trained guide dog or service animal by a person with a disability, in its programs and activities and provides equal access to the Boy Scouts and other designated youth groups.